The song Strawberry Fields Forever by Lennon is full of psychedelic imagery, in stark contrast to the accurate depictions in Penny Lane by Paul McCartney on the other side of the record.
Both songs were intended to be in the Sgt. Pepper's Lonely Hearts Club Band album, but there was pressure for a single to be released, and it was Beatles policy not to include recently released singles in their albums.

Strawberry Fields is also the name of a two and a half acre section of New York's Central Park which is a memorial to John Lennon. It is close to where he lived with his wife, Yoko Ono, and where he was killed.

Centre of the Imagine design in Central Park:

In 2003 the CIA constructed a secret compound known as Strawberry Fields in Cuba for 'high value prisoners'.

Clive Kelly's club Strawberry Fields Forever in Paraty, Brazil is appropriately named, as Argentina and Brazil are the most important strawberry growers in South America.

The club featured waterfalls and pools complete with a sound system playing Beatles music.
See the video Neride and Strawberry Fields in the Historical section. 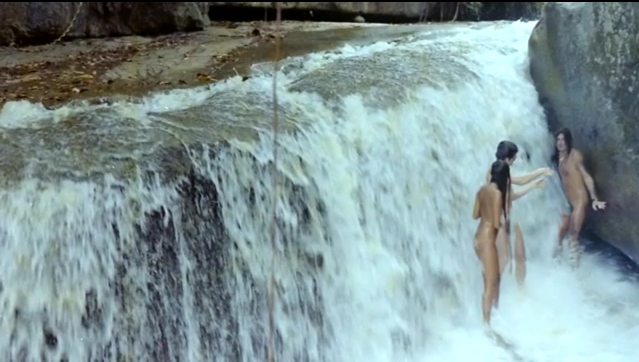 Strawberry Fields in the trees is near the raging river where the water is so clean we drink it direct.
When I built a bridge across the river I put in a microswitch so whenever anyone crosses it, it plays the music Strawberry Fields Forever. And that's where we ask the people to off their clothes. It is an indian type and everybody is natural.
- Not like the nudist clubs in the Mediterranean where the girls go to the discotheque at night wearing jewellery and make up and high heels.

Here they wear no clothes, no knickers, nothing. And the men are totally nude, wearing only their gold chains. It is so funny, the women wear high heels to make their bums stick out more.


Clive Kelly, Facebook 27th October 2013:
AUTHORITY AND FREEDOM:
As I had always been a sort of free thinking person, and then having been to Xingu in the Amazon and lived with the Amerindians, I became very free thinking towards people wearing clothes or not on my boat, or in my house in São Paulo, Brazil, or around the swimming pool, or at my nudist club Strawberry Fields in Paraty, Rio de Janeiro.

Because of my attitude my first mates and my girlfriends just presumed it was the order of the day to not wear any clothes, and especially when there is no water to wash them.

Here I'll just give you three examples of the trouble that was caused by my female friends when they decided not to wear clothes.
Amazingly as it may seem, I was barred from the Aratu Yacht Club in Salvador Bahia, Brazil, because my girlfriend (first mate) Irekaron would not obey the orders of the club's commodore, to be wrapped up, or in other words to wear covering on her new boob job breasts. Being of Amazon indian blood, and after having her tribe totally wiped out by the invaders of the Amazon, she thought that she could make a statement by being natural.

And Tania Nomura (Tambitin) got me in trouble twice. The first time at the Admirals Inn in Antigua. I was showing my film and 90 minute documentary I made in Xingu called Indians. Tambitin was helping me, but she wore the shortest of shorts - the shorts that she normally wore in Brazil. After the film showing drinks were served and the chief of police of the island called Captain King arrived. But when he saw all the eyes of the men on Tambitin's beautiful legs and bum, he immediately ordered her to go back to the boat Survival and change into more respectable clothing. And of course I had to cut short my talkshow and take her back in the dinghy. But as she stepped-from the dingy in her anger at being ejected, she slipped and fell into the sea. Needless to say we did not return that night.

The third time I got in trouble was when we arrived at the British island called Tortola. The inner bay of the island (where boats and ships are normally required to drop anchor) was totally covered in a slick of oil and grease. So I dropped anchor outside in the blue sea. After contacting the port captain's office by VHF radio, I was told to immediately report for check in.

So I left Tamby on board and swam ashore, taking with me an African wraparound kanga [see below] in a plastic bag so as not to get it wet. On arrival at the quayside I washed the oil off my body with fresh water from a tap. I then wrapped the kanga round my torso and reported to the port captain's office. And if it wasn't the original tin god, Captain King, recently transferred from Antigua. On seeing me with no shirt, and just a skirt, his face went as red as a British postbox.
"How dare you present yourself like this in front of a representative of the Queen of England?".

I was immediately arrested and they sent out a tugboat to pull my trimaran survival into the dirty dock, where she was tied alongside those black oil covered tires. I was then escorted back to Survival by six armed men and Captain King. where I was locked alone in the back cabin, and Tamby was locked in the front cabin, as the men noisily searched the boat.

They found my medical cabinets which contained many bottles of procaine [see below], given it to me by a doctor in Brazil to take to a dentist who was visiting the Amazon villages to repair the teeth of the indians.
It seems that when they put their drug testing liquid in the procaine it turned pink, which for them proved that this was in fact cocaine and for this I was arrested and kept on the boat locked up for several days, until the British consulate came to visit the island from the UK.

When he realised that I wanted to speak on British BBC TV and also to The Times newspaper, he immediately ordered that I be set free, with the necessary apologies.
The reason I am writing a story today is to show why I have the reasons to not obey orders from hostile, over pompous over powerful little men who think that they can control my life.
Most of these port captains are ex-slaves of the British, therefore they have gone to the extreme the other way, and have therefore become overzealous, and dangerous.

Then, just to give you an example of the opposite, I go to a French island and I'm not even asked for my passport. That's the difference between the British and other nations.


The kanga is a colourful piece of printed cotton fabric, about 1.5m by 1m, often with a border, worn by women and occasionally by men around the African Great Lakes.

Procaine is a local anaesthetic, used mainly to reduce the pain of intramuscular penicillin injections. It is also used in dentistry.