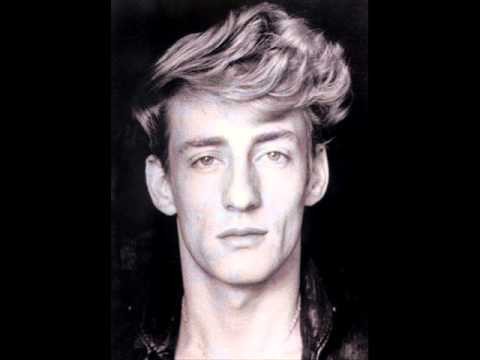 One of the most popular acts on the Liverpool and Hamburg club scenes during the late 50's and early 60's.
Rory Storm was born Alan Caldwell in Liverpool, 1938.
In 1958 he opened a skiffle club in the cellars of a large Victorian house, and among the groups that played there were THE QUARRYMEN, who later became THE BEATLES.
Tragically Rory died in 1972.
Photo by Astrid Kirchherr:
Clive Kelly: Facebook 9th March 2014:
"While my guitar gently weeps, I personally really miss you, dear friend RORY.
RORY STORM, THE KING OF LIVERPOOL UK. Yes KING of THE POOL was he. Nobody even came near to RORY STORM AND THE HURRICANES, featuring RINGO STARR on drums, and JOHNNY GUITAR.
In the 50s,and 60s, BUTLINS HOLIDAY CAMPS were all the rave. Working class HEROS were in abundance at BUTLINS, and RORY STORM topped the bill as the master showman of the North.
Unfortunately RORY had a stammer, he could not converse. He once told me, with the help of his mouthpiece RINGO STARR, that a bomb had dropped too close to his mother during the last war whilst he was still in her womb. 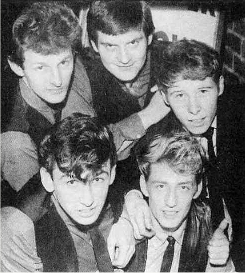 When I arrived in LIVERPOOL, RORY was DEFINITELY the cat's whiskers.
His was the top act in the Pool.
And he lived that image to the full, with his great big winged open topped white car,
and his white suit and shoes, his BLEACHED hair in its own unique style
of ONE BIG WAVE, FLYING ACROSS HIS THIN FACED HIGH FOREHEAD.
A FINE FACE TO BEHOLD. His energy on stage was unequalled, he was a great ball of fire.
I often booked RORY STORM AND HIS HURRICANES to open my new venues. He and RINGO were such good guys, that they sometimes even helped me decorate the clubs. In fact it was them that taught me how to make paper mâché for the cavernous effect of the WITCHES CAULDRON CLUB in New Brighton.
RORY needed RINGO as his alter ego, that is to say, both on and off stage. On stage it was RINGO's prominent confident beat that pushed RORY through the stammer barrier. RORY's stammer only returned after the shows, when the time came for him to talk. But RINGO was ALWAYS there. That is until BRIAN EPSTEIN came out of his closet, and appeared.

EPPY, the new music manager, took over the BEATLES from my partner ALLAN WILLIAMS. Now EPPY really could not fail in his promises to RINGO, as he had the backing of his parents' string of music shops called NORTH EAST MUSIC, NEMS for short. RINGO, RORY's voice, took the bait to become the world's topermost popper most drummer. This left the KING without his stimulus. 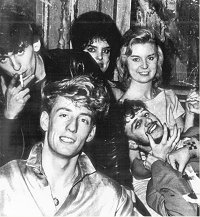 BRIAN then took over all the other talented musicians in LIVERPOOL.
But he left RORY to stew in his abandonment.
As time passed, all the top groups left for LONDON, following BRIAN and THE BEATLES.
RORY was now once again alone with his extremely limiting stammer.
One day I received the news that RORY STORM and his mother had committed suicide [but see below].
RORY was REALLY MY MATE, so was RINGO. I miss you both ohhhh so much now.
Ohhhh did I tell you RORY was also boyfriend of my girlfriend MOE. And he used to bring her to visit me in prison in his big white RORYMOBILE."
[RORY had been unable to sleep due to a chest infection, and had been taking sleeping pills. But the post-mortem found he had not taken a lethal amount. So it seems that RORY died from natural causes, but his mother, on finding her son dead, did commit suicide.]

The Independant (Spencer Leigh) 20 August 1999: Obituary: Johnny Guitar:
"THIS NAME isn't getting us very far," Alan Caldwell said to his Raving Texans one night in 1959. "We'll call ourselves the Hurricanes and change our own names. I'll be Rory Storm, Johnny Byrne can be Johnny Guitar and Ritchie Starkey can be Ringo Starr."
And so, with Lu Walters ("Wally") and Ty Brian (also pseudonyms), Rory Storm and the Hurricanes became the most popular band on Merseyside. That is, until the Beatles came along. . . .